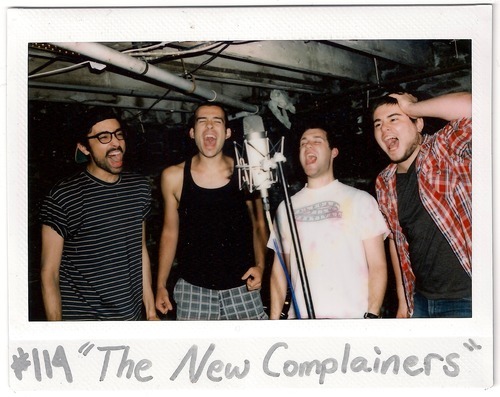 If you were to pass Jon Palmer, The New Complainers frontman, on the street in the city he might just strike you as an ordinary guy, the city folk who fill the rank and file of student youth that are looking for work. Thing is, Jon Palmer is the strident lead singer of a great Boston rock band, and they’ve just released their debut today, I Am Home. Created and produced over a year in a Mission Hill apartment, I Am Home isn’t just the work of some college band using Garageband light production, but a labor of love that rocks with the reckless abandon that only some established rock bands can boast.

Propulsive, and armed with instrumentation that’s inebriated with bar-rock form ( that’s sharp and boozy guitars, syncopated drumming, and keyboard work that amplifies the rhythm), Palmer’s live vocal takes sound like a young Hamilton Leithauser (of The Walkmen) and the harmonies are at times Beatleesque (that’s unified oohs and aahs in the background) but what’s most clear is that the band is really enjoying their time behind the mic.

“Brollo” indeed serves as a good introduction to the album as a whole, with production that could easily have been taken from a live performance, where the guitars burn and hum from small amps and the vocals and drums come clean through, but it’s really “Layaway” and “Whatchya Feel” that struck me as The New Complainers at their best, and if you do believe in the singles era, these would be the two to take from the album (but really, buy the whole album you cheapskate).

The New Complainers are clearly a band that enjoys the night, especially the weekend where alcohol and bars are co-conspirators to fun evenings.

I Am Home is available in a variety of formats: