Justin Townes Earle, Nothing’s Gonna Change The Way You Feel About Me Now 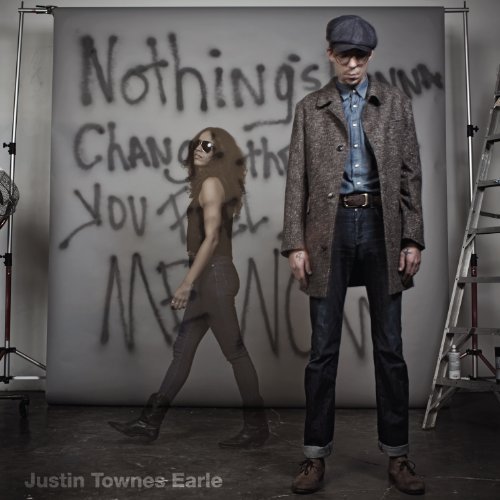 Perhaps a spur of motivation to take the longest album title throne from Fiona Apple (who still requires more … than a reviewer should ever include in an album title), Justin Townes Earle’s latest album swept in forever ago in March.  After the somewhat celebratory Harlem River Blues, the awkwardly lanky yet sartorially informed Earle had seemed to take a step backwards, locked up a month after the album release for alcohol charges and Harlem River Blues was forgotten by critics as almost punishment for his behavior.

Justin Townes Earle’s latest full length is more than just a mouthful. It’s a freeze-frame in the time of Springsteen and Van Morrison circa 1977: the horns warm, the brightness faded, but not fully gone.

Last time around, Harlem River Blues had produced a half exultant, half sorrowful affair.  But there was hope; there was still daylight, happiness tucked away in its little corners.  Nothing’s Gonna Change The Way You Feel About Me Now is much more reserved in its bright spots, more the music of a man in a sorrowful twilight that just had happiness slip through his fingers, the touch still lingering in his mind, the palpable feel.  While some might read the arrangements henceforth on Nothing as characteristically ambiguous, it’s the biggest show of character Justin Townes Earle has had yet.  He’s much more authentic as a man down on his luck, as a character that’s been forgotten and trod upon. The music reflects that: the muted Memphis soul proving equal accompaniment to Townes Earle’s unmistakable voice, and while the opening half of the album might tread a little too softly, the second half of the album is a beauty to unravel, from “Maria” one of Earle’s sweetest aching sorrows yet, to “Movin’ On” a song with a plucky rhythm that is so convincing at telling the listener Earle is just fine, even if he’s not.

More than anything, Nothing’s Gonna Change The Way You Feel About Me Now is an album about what its like to be a man.

Justin Townes Earle is the kind of man that GQ and Esquire love; the dapper sartorial man, a dapper sartorial man who has words of wisdom to boot. He’s a charming man too, despite his former demons – the alcoholic laced night that left him in jail just weeks after his last album came out. His laugh is infectious; it has that warm and inviting quality, a hint of darkness, kind of like the scotch and whiskey that he’s since sworn off. It warms your heart all the same.

The theme of the record, of the man, of what makes him tick, is honesty.

Earle has a gift for combining personal reference and universal feeling. It’s honesty, and it’s consequences laid bare. “Am I Lonely Tonight” is not only about him being alone, but it delves into the ghosts of his past – an absent father, one who he can only identify with through bits and pieces heard on the radio, the horns half mournful, half comforting as he assesses his condition, skin and bones and 300 miles from the Carolina coast. Here is where we find the ghosts of influences past, the haunted Springsteen on Nebraska, the story-telling of traditional country pulled by the roots through the cracked frozen ground.

Earle pushes forward with “Look The Other Way.” A song that would have made Freud proud, the lyrical narrative could be equally directed toward his mother and his lover, arguing with himself on whether he can make himself a better man when the people he cares about don’t care what he does anymore. It’s the narrative that many have traveled before, those who’ve seen love break in front of their eyes, moved by an imaginary hope that believes you dictate the world around you, that the world doesn’t turn without your slightest movement.

It cuts straight to the bone in a man, on “Nothing’s Gonna Change The Way You Feel About Me Now” the album title track, “It’s a shame babe, nothing that you could do, things change babe, such as my feelings for you.” But its more than just a tell off to a love lost: the plaintive, harrowing honesty to his lyrics do nothing to describe his voice, the way it achingly glides over the words like he’s lived it a million times before. It’s a lonely night of a song, something where only the painful memories and drink can be your lone companion.

“Baby’s Got A Bad Idea” is probably the least effective song on the album. Sure it keeps the up-tempo leaning of “Look The Other Way” but this one seems like he’s just painting by the numbers, a filler, but a good filler for sure.  The stellar backing band saves this one, as Earle’s vocals are more ragged than usual.

I didn’t hear “Maria” first from this album (that distinction would go to the title track, which was released prior) but it’s one of my favorites, and it begins the stellar second side of the album. There’s so much feeling, even in the opening trill of the guitars, and Earle’s vocals are at his most affecting and gifted. He lives the words to the point that in your mind he’s not singing them, it’s your own thoughts. This is the horn section’s shining moment too, pulling off a counter-melody midway through, with the effect that the Memphis sound has never sounded so moody and bright.

Down on the Lower East Side

The intro of “Down on the Lower East Side” is almost startling, but Earle does well here to paint a portrait of the universality of urbanity. It doesn’t matter whether it’s Memphis or Manhattan, men will always be men, and they’ll always find the romanticism of a dimly lit street in the early morning hours, reflected here by a rather lovely solitary trumpet, muted and warm, a comfort in the cold and lonely streets.

“Won’t Be The Last Time” is a change of pace, some would call it plodding, but the hushed arrangement only makes Earle’s delivery that much more honest, that much more humble, and that much more hurt. The music pushes against the slow vocals like the world that is ever slipping from his grasp as his words sound like a man sitting next to you at the bar, removed from their backing, more personal than ever.

Memphis In the Rain

Then, with the chime of a bubbling organ, that Memphis sound is back in “Memphis In The Rain”. The arrangement here is in full swing with some percolating guitars and horn lines that embrace the listener in their southern soul happiness. If Dylan had ever done Memphis, this wouldn’t have been out of place on that record.

Following up on his innate ability to mirror the greatest writers in the American Songbook, “Unfortunately, Anna” sounds like a response to the characters of Paul Simon’s “Diamonds on the Soles of Her Shoes” where the bright hope of youth has started to fade, the melody a ghostly echo in his vocals. The sound is that of dying hopes, but it’s a beautiful sadness that seeps through the imagery in this song, and it will probably be the slept on classic of this album, and certainly be held in high regard long after Earle’s career is over. For a man steeped in traditions, this is one of his most timeless songs.

The album closer is the bouncy “Movin’ On”, where Earle’s vocals do a slow dance with the rhythm of the guitars. It’s Earle’s gift that he can be so catchy and so intimate at the same time. It’s the sunshine peaking out after a rainy sleepless night, more of a toe-tapper than the rest of the album, and certainly one of the better songs in his career.

Critics had mixed feelings about the overall sound of this album: some thought that the Memphis sound had been too dulled, that the album was more in stasis than the rest of his work, but I’m among the few that believe that it was an intentional move. Memphis Soul has never sounded so good surrounded by doubt, and the band works as one. Even the upright bass proves to be melodic where the horns disappear, and Earle has never come across more open and humbled, never sounded more like his own man.

There will be those that find this album too honest, too heartbreaking and true to man’s condition that they won’t be able to stand it, but there will be others that relish Justin Townes Earle’s true gift; the storytelling of Springsteen and the honesty and pain of Lennon all rolled into one, the ability to sing out his own demons and connect with the world. The gift and the pain of being a man.
Vocals: 4/5

Top Songs: “Maria”, “Down on the Lower East Side”, “Unfortunately, Anna”, “Memphis In the Rain”