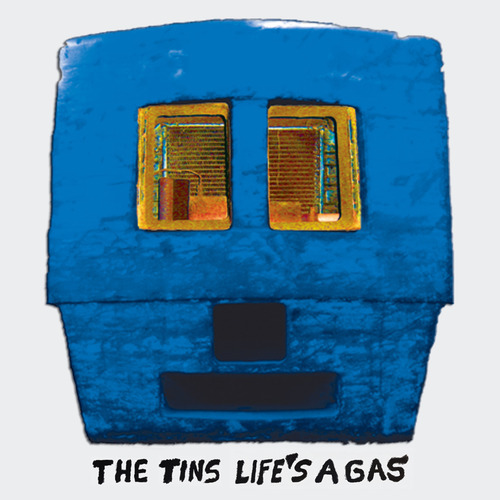 I first heard of The Tins when I came across “Backbone”, a joyful concoction of Weezer’s stadium rock of the 1990’s and popcraft of the 1980’s. I was immediately hooked and un-sated by their only release, The Tins EP , and I wanted more. All the while, The Tins maintained a personal relationship with their fan-base, announcing a Kickstarter campaign to finance their debut album wherein they offered prizes from a modest thank you on their Facebook page, to playing a private show for the donor, to even offering their tour van as compensation (that specific offer was never taken).  Sweet touring van aside, The Tins more than delivered on their first LP, officially out today featuring cuts that exemplified their backbone of 1980’s pop meets 1990’s stadium rock, as well as a few songs that show them heading in a new direction.

“Hit and Miss” begins the album with a snyth-driven hook and an emphatic back beat that builds the song to an energetic crescendo, and it’s all around a strong anthem. The Tins follow the song with a startling change of pace in “We Fought The Moon”, a cut with a startlingly melodic slow hook that finds the band in fine territory in between Modest Mouse (particularly the vocals and syncopation) and Weezer in the fuzzy rock arrangement. “Taking Liberties” could be a lost single from The Monkees with it’s 60’s garage rock organ lines and close-knit harmonies, and it features a nice little Bo Diddley bridge. Meanwhile, “Spies” propels forward with a hook that would have made The Cars proud.  It’s a strong introduction for the album, but perhaps even more surprising is how the second half is even better.

“Vicki” had been released earlier as the album’s first single and it deserves mention as one of the album’s stand out tracks.  It seduces you with that warm and fuzzy 80’s pop vibe, while the lyrics tell a story of “a virgin with the urges” . The accompanying music video is fittingly dark, dead bodies stack up as zombies begin to pick off the band.  While it could be interpreted as commentary on teenagers whose main desire is nothing but having fun and trying to have sex, it’s clear that The Tins are having fun, though few could make this dark humor sound so good.  When “Midnight Crowd” first came onto my speakers, my roommates wondered how they hadn’t heard this Shins song before, and although it’s a bizarre change in arrangement, a more organic and acoustic affair, The Tins trademark anthemic hook is still there in the chorus and far from being derivative, The Tin’s make what could be just a shameless rip-off into a good what-if jump off point for where the band could go with their sound, it doesn’t hurt that they manage to sound more like The Shins of Oh, Inverted World than The Shins have in years.

The Tins begin another dark tongue in cheek tale with “Shozo Hirono” which wraps a ne’er do well tale about a murder with more enthusiasm than a Cormac McCarthy novel as the narrator spirals into confusion.  The instruments swell with climactic psychedelic vigor before a descent into white noise, and the end of the narrator’s story (and life?).

“Colors” brings back the Modest Mouse off beat drumming syncopation, and one of the album’s more dynamic hooks and it’s a nice transition between “Shozo Hirono” and the next track “Please Be Kind” which sounds like The Cars and The Clash had a baby, and that’s a good thing, the track flutters and whirs with a funky bass line, propulsive drumming and fantastic guitar interplay. If “Midnight Crowd” and “Please Be Kind” are indicative of where the band could go moving forward, I’m even more excited for their sophomore effort than I was of their debut.

“Halo” is a story of a love gone wrong, and it has a fascinating build in terms of instrumentation and hooks a plenty, and it helps close out the album along with “Whiteout” on a strong note, with “Whiteout” being their strongest take on the Modest Mouse sound.

While in many cases, sounding like another band is damning praise, The Tins don’t sound like they’re trying to cash in or out of ideas, they just want to pay homage to their influences. Also, as a debut LP, with only a single EP to their name, they’re amazingly polished and cohesive, this is a band that can write anthemic pop rockers and intricate syncopated indie rock with an equally strong footing. If anything, this is a band to keep an eye on, and it’s a great debut.

Grab Life’s A Gas on Bandcamp Art of the Song presents Doin’ It Right In The Land of 1000 Dances, a free mix for your downloading pleasure! Perfectly calibrated to get those hips shakin’ and feet tappin’, play this on your speakers and get ready to dance the night away!  If you’re feeling lucky, just click the picture for the download, or wait til after the tracklisting to click the link below.

Please note that it’s a zip file, and won’t have the proper track order, but if you put all the songs on your itunes, then click the Doin’ It Right In The Land of 1000 Dances.m3u file, iTunes does the work for you. Now that’s what I call Doin’ It Right!

Even if you weren’t lucky enough to be growing up in the 80’s, “Vicki” by The Tins off of their upcoming debut (which was funded by a Kickstarter pledge) The Moon Doesn’t Last for Long will give you that dream. The song stars with some garage riffing before the song envelops you in its bittersweet organ and driving guitar lines. There’s hooks a plenty here and the tongue in cheek bridge bears repeating. Can’t wait to hear the full album, but for now you can stream “Vicki” below. Can’t get enough

The Tins are a band out of Buffalo NY, who have released this catchy little EP, and could be well on their way to becoming a successful band with your help. How you ask? Well they’ve created a Kickstarter account.

Head on over to http://www.kickstarter.com/projects/1443584306/the-tins-first-full-length-album to read the darling little description and enjoy this little gem in the meanwhile.